One year ago today, I was on the trip of a lifetime - Dubai and South Africa. While Sean stayed back at the hotel (recovering from jet lag), the boys and I went on a "desert safari" where we went sand surfing and camel riding, and hung out at an outdoor hookah lounge in the 118 degree Arabian Desert - that was how we spent the Fourth of July 2019. 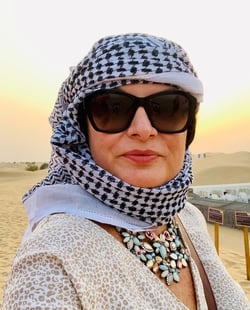 The culture of Dubai is quite an interesting one. I remember being cautious of the "dress code" and schooling my family on the national rules - no swearing in public, for example! A day or two after we'd arrived, we realized there were websites and apps that were inaccessible, and we experienced censorship for the first time.

During our stay, there was a bit of a scandal in the royal family. An Emirate prince had suddenly died due to a drug overdose apparently, and a few months before we arrived, Princess Haya escaped Dubai with her children in pursuit of a divorce from the ruler of Dubai, Sheikh Mohammad, who had four wives. Interestingly enough, there was no mention of any of this while we were there. No headlines anywhere. We asked our tour guide about it - with whom we'd spent the whole day on a private "Dubai ala Mode" tour, but she was completely mum. Lips sealed. Clearly, it was a forbidden topic.

A cosmopolitan city, Dubai is a melting pot, rich with cultures from around the globe who co-exist beautifully smack dab in the middle of the most conflicted region in the world. The architecture is mind boggling, the cleanliness was outstanding, and the forward-thinking advancements were impressive. There is practically no crime and we felt thoroughly safe. And yet there is an undercurrent of corruption and their own form of insidious slavery. While we are glad we went, we left there with mixed feelings.

Upon our arrival in South Africa, we were met with a palpable soul that hums throughout the people. An indescribable heartbeat of pride, contentment, and happiness makes South Africa an unforgettable place. Yet, the unemployment rate is 30%, crime is higher than most other nations in the world, and there are scores and scores of post-Apartheid squatter camps alongside major highways. We visited Robben Island and saw Mandela's prison cell - a place he called home for 27 years as a political prisoner.

On our final flight home, as we filled out our traveler entry forms on the plane upon descent, I pulled out my passport - that little blue book that I've had since I was 12 years old, and have flashed at immigration officials a hundred times. I still am in awe of its power.

People leave the only place they've ever called home, said goodbye to family they'll never see again, risked their lives in unspeakable conditions, in pursuit of a better life that awaits in America. I've never done anything to deserve that little blue book - just lucky I was born here.

If my boys have heard my speech once, they've heard it a hundred times, and give me the proverbial eye-roll, with a "yeeeessss we know" muttered under their breath. But as a mother, I don't care if they dismiss it - it'll surely sink in anyway. Whenever we leave or arrive in the county and I hand them their passports, I preach my passport mantra:

"Boys - see this little blue book? Hold it close and tight, and let it be a reminder of the privilege you have. Let it be a reminder of the freedoms you hold as a human being. Let it be a token to the hopes and dreams that you get to have - the possibilities that are within reach, all because you happened to be born in a country that has given you opportunity from the moment you arrived in this world. It is your responsibility - if, for no other reason, than out of respect for those who do not have your God-given rights - to seize that opportunity and use it to its fullest extent. Do something with it. Discover your purpose, and use your gifts to make the world a better place than it was when you came into it. The freedom that lies behind that little blue book is what makes anything possible. And always, always, be thankful you can."

Our country is not perfect. We are not where we want to be - but we've come a long way. Our journey will be everlasting, and through it all, we must never forget the gifts, blessings, the rights and responsibilities we have - not only as citizens of the world, but in humankind itself. We must forgive ourselves and forgive one another, if we ever expect to heal. They say forgiveness isn't about the other person. In fact, it's about claiming the peace that you deserve.

"As I walked out the door toward the gate that would lead to my freedom, I knew that if I didn't leave my bitterness and hatred behind, I would still be in prison." ~ Nelson Mandela

The exit from Robben Island