Lessons from the road...

My husband, Sean, and I were driving to Las Vegas a few weeks ago. From SoCal, it's a 3-4 hour drive on the 15 freeway through the desolate Mohave Desert, which is basically the only direct way to get there.

It's a great feeling to be out on the open road - a feeling of freedom and fresh air, and drivers get caught up in this euphoria, with the top down, and open up their V12s, flying at speeds in excess of 100mph.

Not to be a buzz kill, but when accidents happen on the way to Vegas - they're bad. And they cause the only direct artery between Vegas and SoCal to come to a complete standstill for hours. In the Summer months, it's usually 105-115 degrees in desert dry heat.

Such was the case a few weeks ago when we were on the Eastbound 15. We noticed there were suddenly no cars coming towards us in the opposing lanes - so we knew there must have been a pretty big accident ahead. Sure enough, we see the emergency vehicle lights. While our lanes were still moving at full throttle, we passed the horrific crash and had seconds to size up the situation. Mind you, Sean is 6'5" and I am a mere 5'2", so our vantage points out the windshield are vastly different. His brain is that of an engineer's, mine is philosophical.

Sean said "That was a cement mixer that burned and a flat-bed tow truck that got hit." I said "Yea, and that car that went on down the embankment." He replied, "Oh I didn't see that." I said "Yes, there was a crane hoisting it up - you didn't see it?" He said, "No, but it was at least a double fatality." I said "How do you know?" He replied, "Because of those two yellow bags that were being loaded into that black coroner's van.

I completely missed the coroner's van. I missed the burned cement mixer, and I didn't see the tow truck. I only noticed the wreckage, the crane hoisting the car, and all of the stopped vehicles with people standing in the median. Yet Sean missed the things I saw. How could two people look at the same thing, at the same time, from the same location, and see two completely different perspectives? And - we were both right.

A few weeks later, my son, Auty, and I flew to Alaska to connect with family. My nephew from Florida lives there with his native-Alaskan wife and their daughter. My sister, brother-in-law, niece, and her fiancé flew in from north Florida. Auty and I obviously flew in from SoCal and we all stayed in an Airbnb. While we are all family, my sister and I grew up in the same house with the same parents, we have lived 3,000 miles away for all of our adult lives, and needless to say - like many siblings, we are polar opposites. After a day or so, our cultural differences started to become apparent.

They live in an itty bitty town just 5 miles south of the Georgia border, with only one traffic light - and it blinks red (not even a real green / yellow / red light), with a house on 20 acres out in the country. My niece's fiancé grew up in South Georgia and his dad managed a plantation there. For less than $200,000, they can own a home that would cost $1,000,000 in SoCal. Auty and I live 30 miles from Los Angeles in a suburb, surrounded by houses, and hit 4 traffic lights on the one-mile drive to the grocery store. It's fast, it's crowded, and experiencing nature isn't out our doorstep - it's a road trip.

When dinnertime rolled around in Alaska, I hop on GrubHub, intending to order delivery of wings or pizza or something. My sister and her family have gone to the grocery store and are planning to cook up a whole spread from scratch. It didn't dawn on me to rent a car, I just figured we'd Uber everywhere - until my sister picked us up in the rental SUV, and I realized that was probably a better option.

As the vacation went on, discussions ensued about our Covid lives, the concerns of it all, and the racial tensions in our country. We also planned meals together and planned activities together. Naturally, I went to find a private captain we could hire to take us out on a boat for the day to see the whales and catch salmon. We would have a fish processing place handle, package, and ship months worth of fish back to our house. My sister's family saw no point in any of that - they have fishing poles and can cast a line in any body of water off the side of the road. They'll skin and filet the fish themselves and cook it. Any leftovers, they'll put in a ziplock bag, throw in the freezer, and pack it in a cooler for the flight home. Whales? They just take a drive or find a random hiking trail - we can probably catch a glimpse of some that way; no need to pay some captain to take us on a boat.

So guess what we did? We did both. I got my chartered captain who took us to see magnificent whales, and they pulled off the roadside to go fishing and caught lots of salmon. Turned out - we were both right.

With the whole family sitting around the dinner table, I couldn't help but realize how different our backgrounds and childhoods were. Growing up on a plantation in South Georgia, the fiancé (with a thiiiiick accent) has his vastly different perspective than my son who has grown up in the melting pot of SoCal. Each lens is steeped in centuries-old history that has led them to where they are, and how they see the world. Our responses to Covid were also very different - Alaskans, Floridians, and Californians all sitting at the table, all family - and in that moment, I saw and experienced for the first time since our world changed in March, how deep the multicultural waters run in our nation.

Anyone who knows me will tell you that one of my biggest flaws is that I have to be "right." I will argue my point to death, and before I make any claim to anything - I have to be certain I am right about it. The thought of being wrong is tough, man. And as I grow, I've found that someone doesn't have to be wrong in order for me to be right.

I most certainly didn't want to screw up our family vacation by getting into some heated argument about our society's pressures right now, and then be stuck in an Airbnb with tension so thick you could cut it with a knife. How awkward would it be to wake up and have coffee, sharing a house with people who have verbally annihilated one another? Yuck.

Being right wasn't worth all of that, so I decided to sit back and observe, and it was actually relaxing to embrace the perspective that no one was right or wrong. We all come from different walks of life that make up who we are and what we believe. And if I'd walked a mile in their shoes, I may see the world through their lens too.

Peacefully enjoying my coffee on the back deck overlooking Auke Bay, I got to wake up with the bald eagles every morning. They, too, fished for salmon in their own unique way - flying high above to spot them, and nose-diving to catch them. The emblem of our nation, with its fierce beauty and proud independence, enjoys a macrocosmic perspective of the world that served me well on that vacation.

Every time I return from my travels, I learn something. The lessons from this trip were profound, and came at the perfect time.

Somebody posted this picture of sunflowers on Facebook and said "How do you interpret this?" What I see is sunflowers at a concert facing the main stage, with the sunflower facing us taking the selfie. There were 30+ comments, with different answers.

The beauty of it is - we are all right. 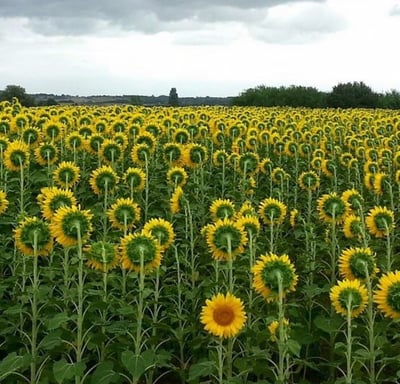